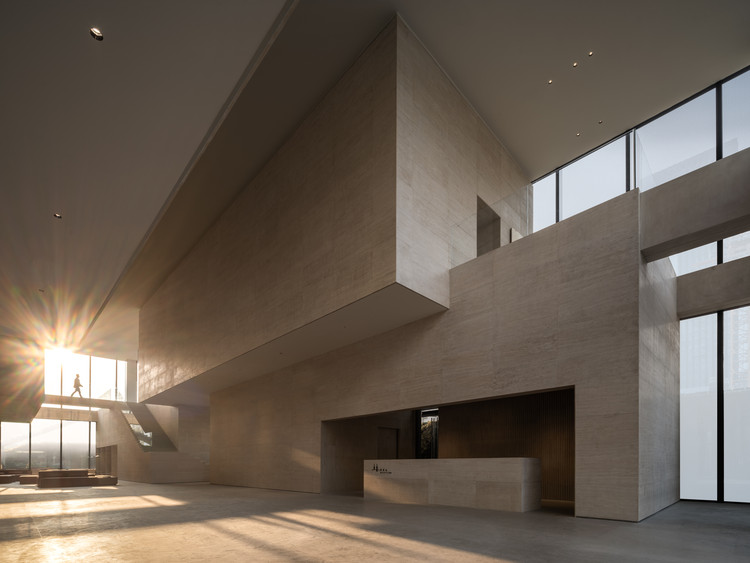 Vertical Lifen. Affection in all directions by Simplicity and Zigzaging. Lifen in Wuhan resembles a lane in Beijing and it is the essential cultural symbol in the city. The journal depicts the common people’s lives, mixed culture in the settlement, as well as the rise and fall of the population in the places. It shows the mutual prosperity of building and life. At Wuhan beach with the combination of the present and the past and western and eastern culture, by modern language, Water from Design reconstructed Life. Through the horizontal extension of traditional compound houses and vertical characteristics of western buildings, it analyzed and reorganized vertical and horizontal dimensions and reconstructed the modern space in the lanes.

Simulation and reconstruction of Lifen. At the axis of the long base, it drew the loft corridor in the space and at the left and right ends. It constructed vertical two and three floors with different sizes of volume and reorganized the vertical village. The corridor on the first floor is the affective interaction for people and it symbolizes “the street” of Lifen. It serves for the large installations or performance of artistic behavior. The audiences can walk through different exhibition areas and they can be relaxed alone or in groups.

From modern perspective, we rearranged the symmetry of traditional compound houses. The vaults, bell towers, and balconies introduced in the period of the settlement were simplified as the dimensions and opening of geometric volumes. The structure was seemingly random. It creates unstable playfulness and at the same time, it shows the constantly extended street landscape of lives in Lifen.

Construction of the shape and poetic pieces. Withdrawn juxtaposed booth seat is on the first floor. Semi-independent design is connected as Lifen. The residents rest, chat or watch the traditional opera in the hall. The relationship is enhanced. The ceiling lamp in the lobby which represents the street lamp is simple and it shows the western aesthetics in the period of settlement and it can be seen in modern Lifen.

The vertical neighborhood is connected by stairs and divided into different sections which are turned into a three-dimensional network. By walking on the corridors of the platform, we look for the next bridge and it reinforces the climate of the space. The audiences can easily walk in Lifen and they would not feel anxious when getting lost. The convergence of houses, streets, bridges and small courtyards results the follow of the building.

Integration of the concept of wharf of traditional opera in the building is further applied to the selection of materials. From the angle of depression, we constructed the familiar houses of Lifen of the past, and transformed the urban memory into vertical wall. In addition, in order to reinforce the connection of the volumes and challenge the visual stability, we selected thick Travertine, while the small openings and cutting lines, which are not straight, are remained. It resembles the effect and accumulation of time on buildings, and cannot be simulated by industrial machines. It shows the unfinished beauty between the past and future.

In the children’s playground on the second floor, instead of the conventional bright colors which are not connected with the public area, we applied simple layout and accessible materials in Lifen, allowing the children to enjoy this area. It reminds us of the childhood in the lanes. We played hide-and-seek or drew with chalks, and played with the friends until the sunset.

Education
We use cookies on our website to give you the most relevant experience by remembering your preferences and repeat visits. By clicking “Accept All”, you consent to the use of ALL the cookies. However, you may visit "Cookie Settings" to provide a controlled consent.
Cookie SettingsAccept All
Manage consent