The new Top Gun movie has been released in cinemas, and PetaPixel is revisiting the time when a photographer sacrificed his body to recreate the iconic Polaroid scene from the original film.

Blair Bunting audaciously attempted to recreate the scene from the 1986 Top Gun movie where Goose flies upside down and takes a polaroid picture of his Russian nemesis.

Bunting teamed up with Jaron Schneider, now the Editor-in-Chief of PetaPixel, and cameraman Toby Harriman to film Bunting capturing the daring photos. The camera crew collaborated with the Patriots Jet Team from Byron, California, who operate six Aero L-39 Albatros.

Bunting did manage to capture an unbelievable photo of one of the jets while upside down, but the photo came at a heavy cost after he was left with marks and bruises, and the doctor had to make sure his collarbone wasn’t broken. 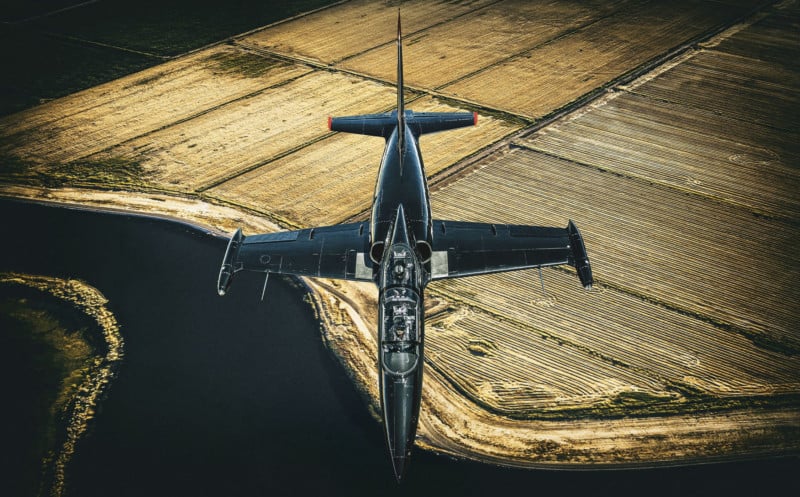 “We learned that you should never carry a really heavy camera inside of a cockpit where you’re pulling Gs,” Bunting says in the video from 2016.

Just a One Time Gig

Reflecting on the shoot, Schneider says that he “probably” wouldn’t do it again given the stress and the risks involved.

“The shoot was incredibly challenging to pull off for several reasons. First, jets are not designed to stay upside down for very long. Any longer than maybe 20 seconds and you starve the jet of fuel and you’ll crash,” he explains.

“Knowing this, we went into it with a very detailed flight plan that we went over multiple times prior to taking off. On top of the logistics of the jet moves, filming it was also really hard. I’m strapped into the flight chair, so my range of movement is heavily restricted,” he continues.

“That meant that to use the camera we chose for the shoot, which was a Canon 1DX Mark II, I wasn’t going to be able to see what I was shooting without an external monitor since that rear LCD doesn’t rotate. To get around this, we jury-rigged a way for me to use an HDMI display that was mounted in front of me so I could actually focus on the jets which would be on my left.

“The capabilities of cameras have gotten so much better in just a few short years. It would have been a totally different story with today’s tech.” 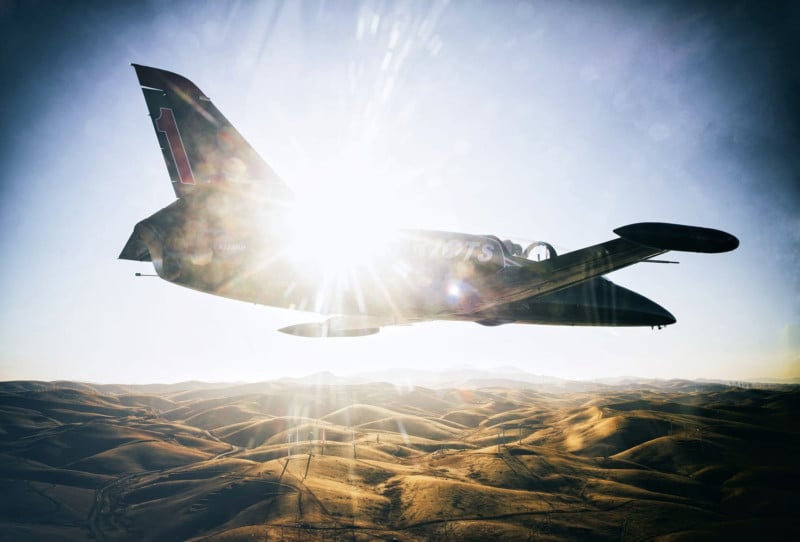 Schnieder also says that the temperature that day was pushing 100-degrees, and despite the jets having an air condition system, it was of no use because of the hole in the canopy that was utilized to capture a clean video shot.

“That meant I was getting real, clear footage with my camera that was unobstructed but it also meant that any cool air from the air conditioner was immediately swept out of the hole,” says Schneider.

“As you can imagine, that hole also made the cockpit extremely loud, which diminished my ability to communicate with my pilot. We knew that going in, which is another reason pre-planning was so important.

“Due to the heat and the fact we sustained almost 9 Gs during the flight, I felt absolutely terrible after we touched down. I drank about two bottles of water and laid down on a couch for about 15 minutes. I didn’t pass out during the flight nor did I throw up, but I came darn close.”

So while the stunt the team pulled six years ago proved that Goose’s photo was possible, they also found it severely taxing on those whose bodies aren’t trained like actual fighter pilots.

Shipping Company
We use cookies on our website to give you the most relevant experience by remembering your preferences and repeat visits. By clicking “Accept All”, you consent to the use of ALL the cookies. However, you may visit "Cookie Settings" to provide a controlled consent.
Cookie SettingsAccept All
Manage consent