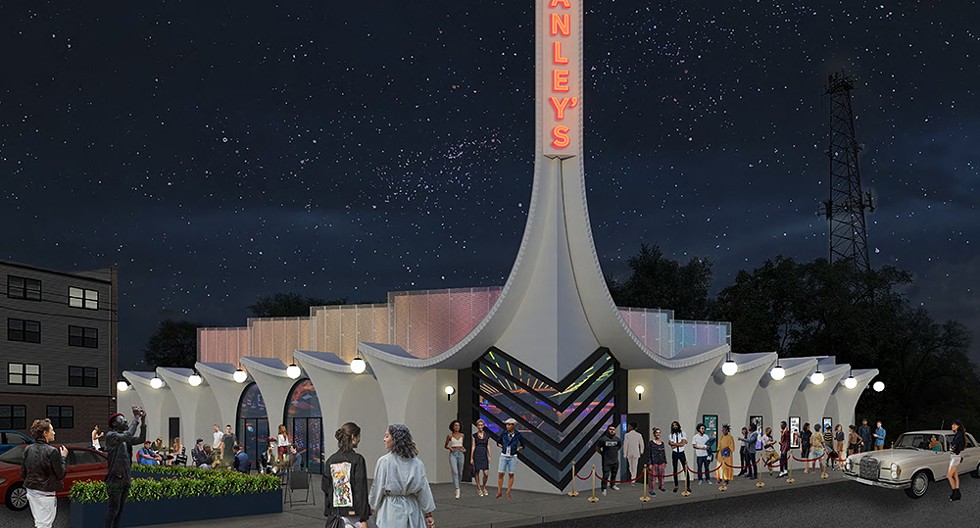 The abandoned, graffiti-covered Stanley’s Mannia Café Chinese restaurant in Detroit’s Milwaukee Junction neighborhood has seen better days, but even in its state of disrepair it remains one of the city’s architectural gems. The stunning building, with its tall spire and sweeping flourishes, was designed by Nathan Johnson, a Black, Detroit-based visionary architect who worked in the futuristic “Googie” Mid-century modern style commonly found in Los Angeles, known for its curvy, Space Age-inspired shapes.

Johnson died on Nov. 5 at age 96, just days before the Detroit Historic Commission approved a new proposal to bring back Stanley’s as a new music venue, on Nov. 10. The pitch comes from Jen Lyon, owner of indie music promoter MeanRed Productions, who bought the property at 265 E. Baltimore St. earlier this year for $750,000, according to Crain’s Detroit Business.

Lyon tells Metro Times she had been in touch with Johnson’s family, and was in the process of setting up a meeting with him before his death. She says she recently attended his funeral.

“We wanted to be grateful and say thank you for creating this space, and tell him that we will do our best to honor it,” she says of the building, which she refers to as “this little otherworldly moment” in the city.

“I don’t know if we could get a blessing until it’s done,” she says.

MeanRed Productions books music performances across genres, like hip-hop and electronic music, at Detroit venues like the Aretha Franklin Amphitheatre, the Tangent Gallery, Willis Show Bar, and the Russell Industrial Center. The proposed venue at Stanley’s would be through a partnership with The Right Productions, which operates and manages the Aretha.

The proposal would transform Stanley’s into a music venue with a ticket capacity of about 780, placing it somewhere between venues like El Club and Saint Andrew’s Hall in terms of size. The design calls for raising the roof from 11 feet to 20 feet, and adding more windows and doors to the walls. It also calls for adding a 1,818-square-foot extension to the 8,000-square-foot building, which would house a smaller lounge-style room that could hold about 125 people. The space would also include a 30-seat restaurant.

Detroit’s Historic Commission ensures the preservation of historically and culturally significant areas of the city, which Stanley’s Mannia Café was designated in 2018.

The building has a history steeped in Detroit’s music scenes.

Stanley’s was opened on March 22, 1971 by restaurateur Stanley Hong, a Chinese immigrant who came to Detroit in the 1930s and opened three restaurants here. At a time of racial strife, Stanley’s represented a bond between Detroit’s Black and Asian communities. After the city demolished New Bethel Baptist Church — a center of Detroit’s civil rights movement, where Aretha Franklin’s father served as Reverend — to construct I-375, Johnson was tapped to design a new building for the church. Franklin was known to frequent Stanley’s, along with Motown act the Temptations and Coleman Young, Detroit’s first Black mayor. Hong grew close with Johnson, who even designed his Boston-Edison home.

In the ’90s, Stanley’s became part of Detroit’s hip-hop scene. Clothing designer Maurice Malone, known for hosting rap battles at his Seven Mile clothing store Hip Hop Shop, threw a weekly “Rhythm Kitchen” event at Stanley’s. The tables would get cleared out, and fans could order Chinese take-out and a Colt 45 40-oz. beer and watch sets by up-and-coming emcees, including a young Eminem — the inspiration for the Chin Tiki scene in Eminem’s movie 8 Mile.

Lyon says she hopes to maintain the venue’s place as a haven for underground music styles, adding that it was nontraditional venues that gave her a break in booking events. “I don’t think there’s going to be any genre that’s off the table. I think hip-hop, to me, is culturally just as important to present as avant-garde jazz,” she says, adding, “The goal isn’t to do the most shows, it’s to do the shows that feel right, and that connect with our community.” She says there are also talks to create a nonprofit organization that could commission artists to present work in Detroit.

Lyon cautions that the project is still “in the very super beginning planning stages.” The plan still has to clear Detroit’s Buildings, Safety Engineering, and Environmental Department, as well as a zoning review. She says she hopes to break ground in the first or second quarter of next year.

“It’s been like, a couple of years of slow thoughtfulness,” she says. “Real slow. This is not a fast-moving train.”

The Rocky Historical past of Gorge Track

Dancing for Days in Detroit for the Motion Tune Competition

Real Estate
We use cookies on our website to give you the most relevant experience by remembering your preferences and repeat visits. By clicking “Accept All”, you consent to the use of ALL the cookies. However, you may visit "Cookie Settings" to provide a controlled consent.
Cookie SettingsAccept All
Manage consent