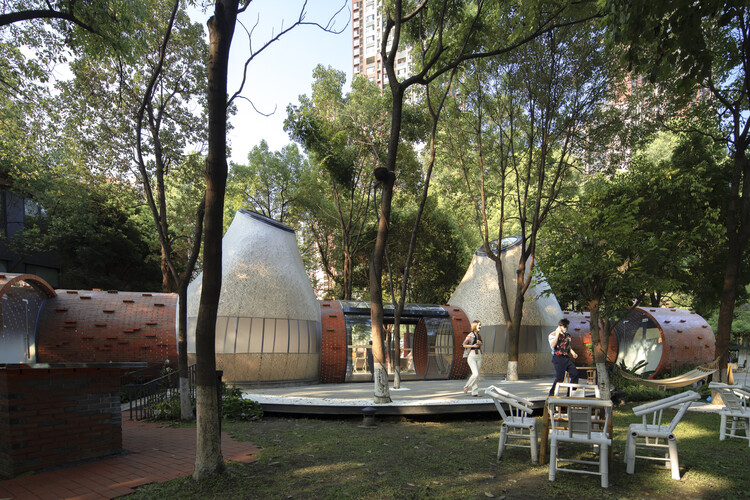 Origins from Eastern Suburbs Industrial Park and the original features of the site. Dongjiao Memory was converted from the former site of the state-owned Hongguang Electronic Tube Factory, located in the former old industrial area on the outer side of the East Second Ring Road in Chenghua District, Chengdu. Dongjiao Memory is a music park in the eastern part of Chengdu, a multicultural park that brings together music, art, theatre, photography, and other cultural forms; as a legacy of the industrial era, it perfectly retains the factory memories familiar to the generations.

Miss Dong and Martin’s public art space is located at the entrance to the East Gate. The periphery faces the commercial street. The view of the area extends not only to the outer streets but also through to the factory. The site is covered by high-density woods and the transparency of the landscape is not very high. To preserve the existing trees, all the original ones were avoided when selecting the building site. In this sense, not only the largest visual aspect of the streets along with the factory area can be illustrated, but the relation between the building under the tree shade and the surrounding environment can also be further echoed.

Light interventions and environment. Between an industrial site and a dense forest, the initial design attitude is to build a familiar but different context with minimal material interventions and light construction measures. The functional form, the choice of materials, the tectonic measures, and the resulting simple forms all revolve around a strategy of light intervention. The barrel-shaped units formed by the lap of the bricks in response to the forces of the arches enclose the linear path space; the vesicular membrane masses supported by the natural and lively form of the handmade bamboo weaving link the brick barrel-shaped units, becoming amplified nodal spaces. The barrel-shaped units allude to the unique “chimney” element of the industrial plant area and reproduce the memories of the plant site through the cylindrical shape of the “chimney”, making the design of the project in line with the original culture of the Eastern Suburbs Industrial Park. The cylinder represents the memory of the factory’s chimney and the rebirth of the new space, a merging of the old and the new, reassembled and interpreted as a tribute to the past and a yearning for positive rebirth. The building is enriched by an elevated ‘tray’, which makes the building lighter and more dynamic within the site. The preservation of the site’s native trees naturally creates a spatial atmosphere of the old Chengdu courtyard culture, linking it to modern life and ultimately demonstrating a new fashionable aesthetic space in the present.

These industrial elements are transformed, but in terms of scale and spatial combination, they are different from traditional ones, adapted to the requirements of culture, art, and other public art design, carrying the philosophy of “the doctrine of the mean and harmony in diversity, but not uniformity”. The site has been reorganised by using the only remaining areas under the native woods. The ‘chimney’ is cut and reorganised, while the bamboo weaved space is integrated into it, but defined temporarily, with the surface and space reorganised over time to create a new space that meets the aesthetics of the different times.

The effective cutting of the site enhances the interaction between internal and external spaces, allowing the woods to merge with the space. A transparent light block in the central core of the building completes the spatial intersection while activating the functional needs of the internal and external sites. The platform is raised to harmonise the view from the road while playing the role of the mechanical and electrical equipment access and the building’s damp-proof function. The bamboo weaving space is woven through the nonphysical cultural heritage technique, showing the memories of life in the old western Sichuan plain area; the use of technological building membranes reflects the fashionable vitality of the contemporary city.

In the whole structure, the use of clear water ceramic tiles, transparent acrylic, bamboo weaving, and membrane materials, through the middle of the glass pipe to link the formation of different round forms of space from right to left, completed the transformation of the corresponding interior function. The solidity of the brick cylinders and the transparency of the bamboo membrane bubble create a combination of hardness and softness on this site and building, although they are two distinctly different materials.

The Flash and temporality are other manifestations of the light intervention strategy at the commercial activity level. In response to the tidal wave of people that surrounds the music festival, the way the space operates will also change. The brick silos, the bamboo bubble units, and the outdoor terraces surrounded by woods demonstrate a completely different spatial state because of the involvement of different people. The light and dark, solid and translucent lighting bring the building, the people, and the trees together into a new ‘nature’. The light intervention strategy determines the choice of light materials, the flexible site layout, and the temporary business settings. The forms that play on the characteristics of the materials respond to the historical characteristics of the site and the unique spatial experience.

Automotive
We use cookies on our website to give you the most relevant experience by remembering your preferences and repeat visits. By clicking “Accept All”, you consent to the use of ALL the cookies. However, you may visit "Cookie Settings" to provide a controlled consent.
Cookie SettingsAccept All
Manage consent