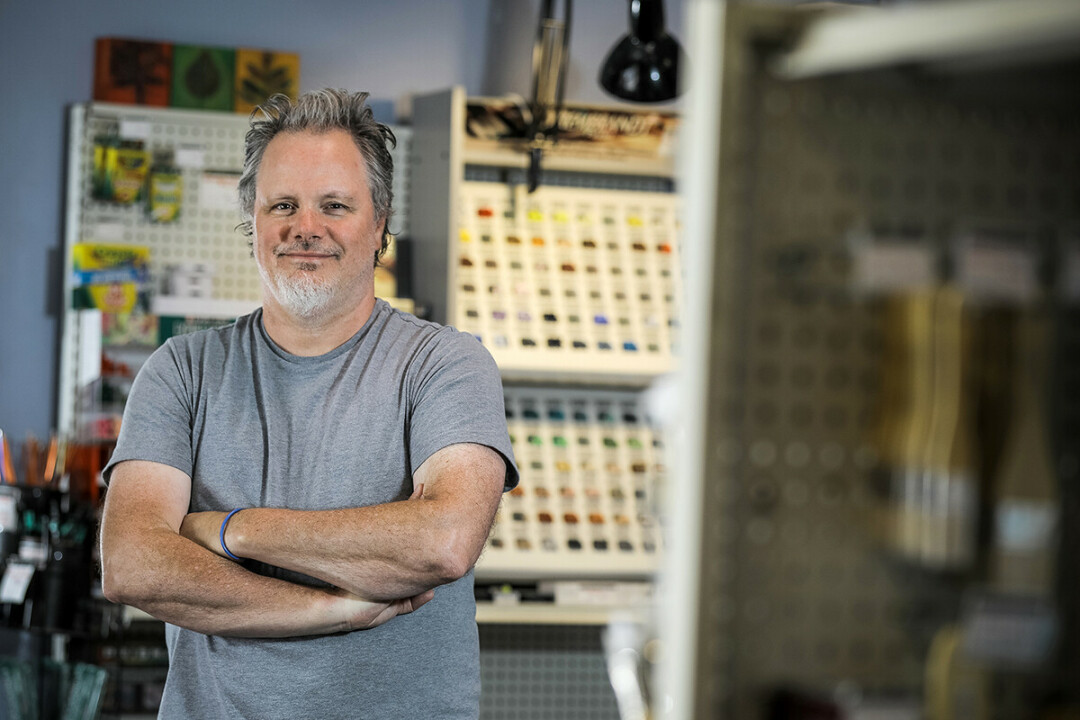 FUELING ART. Mike Tarr of Mike’s Art & Design Supply has lived in Menomonie since 1990, and knows pretty much anything you need to know about starting up a new art form – whether that’s music, visual art, or hooking you up with the best local restaurants.

Michael “Mike” Tarr has lived in Menomonie since 1990, when he settled in town to pursue a major in studio art with an emphasis in ceramics and painting at UW-Eau Claire. The Appleton native has worn many hats: student, business manager, UW-Stout faculty member, and is now perhaps best known as the longtime business owner of Mike’s Art & Design Supply (105 Main St. East). He also paints, draws, and has performed in a few bands over the years. Call him a connoisseur of all things art – and culture!

Neighborhood you live in, city:

I live in what’s called the Lakeview Annex in Menomonie. Few people know that it’s called that – or at least no one seems to refer to it that way. It’s an old neighborhood about a block off a smaller neighborhood that’s sometimes called Park Circle, though the park is really Lakeview Park – which also few people seem to know – and is sometimes called Half-Moon Park! There are a few big, old, stately homes there and the larger neighborhood was apparently originally populated by early university administrators and faculty – a few of whom have UW-Stout university buildings named after them. My house was built and lived in by Hans Hansen and his family. He taught woodworking and cabinetry at Stout for 40 years, and Hansen Hall is named after him.

Describe a rewarding experience you’ve had in your current job?

It’s not unusual for customers to come in having no idea what they need or are looking for. Typically this is either a new incoming college freshman or someone taking up a new hobby. That’s kind of a vulnerable place to be in for them since many of the things we sell are of a technical nature and there can be a decent amount of money involved. Demystifying what they need in a concise way and sending them out into the world with a clearer and more stress-free understanding of what they’re getting involved in is pretty satisfying.

What is one art supply you couldn’t live without?

I always love a good piece of Asian-style printmaking paper. Maybe a black pastel too. Just the basics!

What place in town considers you a regular?

Probably Marion’s Legacy on Broadway. They’re right next to my shop and so are quick and easy to pop in. If you’re there, ask for the Mike’s Special! It’s basically a vanilla iced coffee with half ice and room for cream.

Other than the happiness of my family, it’s probably playing music and fooling around with music gear. Though I love art and my studio practice, I’m really a guitar and music nut at heart.

What is one of the best experiences you’ve had in the Chippewa Valley?

Playing a good show with friends back during my band days or watching the Bad Plus at the Mabel Tainter Memorial Theater. I once flew over the area in a single engine plane as well, which was cool!

What frustrates you about Menomonie?

Probably the algae blooms in Lake Menomin. I understand that the problem is a larger watershed issue and more complex than people may think, but it would be nice if the lake was a more viable recreation area.

What is your favorite piece of local trivia?

Captain Andrew Tainter’s (one of Menomonie’s lumber barons, town fathers, and builder of the Mabel Tainter Memorial Theater from the late 1800s) brother Jeremiah created the “Tainter Gate” style of dam, of which over 300 are still in use today.

What is the strangest art utensil you sell at Mike’s?

Probably a rabbet cutter. It’s a specialized tool that does one thing: it removes the face layer and the foam interior –but not the other face layer – of a 3/16” thick piece of foamcore board along one edge in order to create a “rabbet” for a seamless joint. You wouldn’t know any of that by looking at the tool, though.

What do you think Menomonie really needs?

Menomonie could use a couple of higher-end restaurants. There are some good places to eat, to be sure, but in the last few years we’ve lost a couple good restaurants that haven’t been replaced.

If you could play kubb with one person from the Chippewa Valley, who would it be?

My lovely wife Kari Tarr. Neither of us knows a thing about Kubb so it would be fun to fumble through it together!

Death bed, one meal from a local restaurant, what would it be?

Curried mussels with a grood glass of white wine from Mona Lisa’s, preceded by a bourbon Manhattan at the bar and followed by crème brulee and coffee.

HOME IMPROVEMENT
We use cookies on our website to give you the most relevant experience by remembering your preferences and repeat visits. By clicking “Accept All”, you consent to the use of ALL the cookies. However, you may visit "Cookie Settings" to provide a controlled consent.
Cookie SettingsAccept All
Manage consent