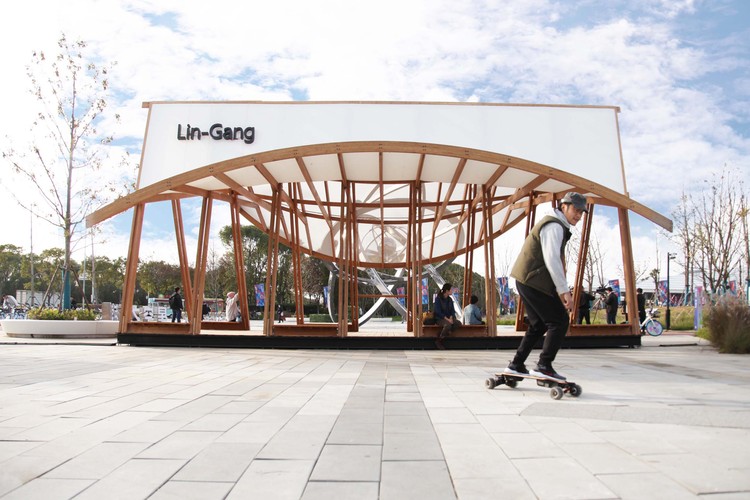 Scenario challenges of the future community. Lingang new area is different from the urban area of Shanghai and has a higher and broader international vision at the beginning of the new city construction. In recent years, the level of Lingang’s urban development has been significantly improved, and the framework of a world-class modern new city has been initially formed: the population concentration effect is obvious, the framework of convenient and efficient transportation network has been basically formed, high-quality international urban service functions are basically completed, the basic framework of digital city construction has been formed, the regional ecological environment has been further improved, and efforts have been made to realize the “15-minute living service circle” and become the benchmark of future city construction. As one of the exhibits of the 2021 Shanghai Urban Space Art Season – Lingang Sample Exhibition, the cycling pavilion is designed as a spatial experience node to experience the future lifestyle and spatial characteristics of Lingang, with a focus on the “cycling movement”.

Reducing carbon emissions – a low carbon system led by bamboo and steel. The full coverage of the low carbon system for the future life state and green city construction is one of the goals of the new Lingang area. As one of the nodes of the cycling pavilion and urban furniture service system, the structure system of the cycling pavilion is made of steel and wood structure from the beginning to reduce carbon emission. Low carbon green construction is considered from the production and processing of main materials, transportation of materials and equipment, construction process, and building operation.

The construction process is highly efficient and can reduce carbon emissions by more than 40% over its life which is an important technological path to achieve “peak carbon” and “carbon neutrality” in the construction industry. The construction process also has a good dust reduction effect, saving water, electricity, and other energy, while achieving the original purpose of building energy-saving and environmental protection.

The light intervention of assembled bamboo and wood structures. We have been thinking about how to make the building adaptable to the city that needs micro-renewal and integrate with the site with the lightest intervention within the constraints of the site conditions. The cycling pavilion is an assembled construction with bamboo and wood structure, and the material utilization rate is improved by down-grading optimization and reuse of components.

Interspersed parking. The spacing of the structural uprights is set to accommodate bicycle wheels, which can be easily inserted for parking, and children can easily park their bicycles into them, which can also meet the parking needs of nearby residents when there is no demand for professional events during normal times.

Suspension parking. Suspended parking is suitable for professional road cycling events, where professional bicycles cannot be independently parked and have little weight and can be suspended on the crossbar to achieve a certain number of bicycle storage and parking. The suspension crossbar is rotated by a combination of bolts as well as powerful magnets and can be stored when no event is held.

A pavilion about cycling. The out-of-the-box wooden spokes sweep through the air, creating a smooth curved surface.

Structure. In the way the timbers are assembled, the architects staggered the timbers and nibbled them together so that the load-bearing and maintenance systems of the timber structure are integrated into one, “weaving” them into a stable triangular structure, thus eliminating diagonal bracing. This straightforward construction gives the building structure visual certainty and unity.

SEO WEB
We use cookies on our website to give you the most relevant experience by remembering your preferences and repeat visits. By clicking “Accept All”, you consent to the use of ALL the cookies. However, you may visit "Cookie Settings" to provide a controlled consent.
Cookie SettingsAccept All
Manage consent