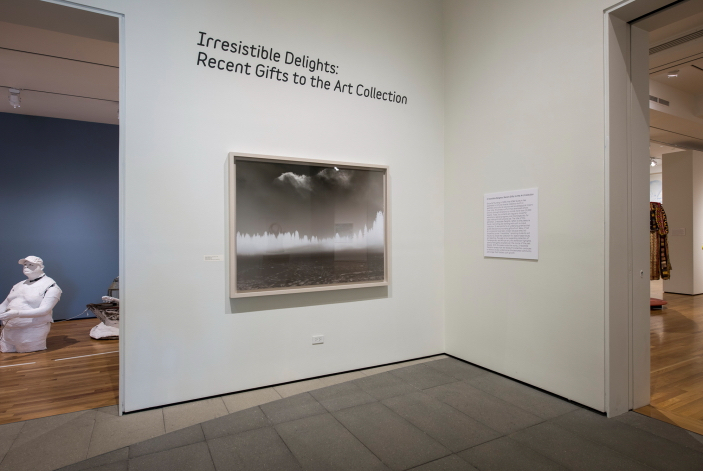 After more than a year of being shuttered, UC Santa Barbara’s Art, Design & Architecture Museum reopened on Sept. 25 to showcase its new in-person exhibitions: “Irresistible Delights: Recent Gifts to the Art Collection,” “Sound of a Thousand Years: Gagaku Instruments from Japan” and “From Riggs to Neutra and Niemeyer: Tremaine Houses, 1936-1977.”

“Having [the museum] filled with people is reenergizing … and it’s a space for students to absolutely feel welcome,” shared Gabriel Ritter, the newly appointed director of the UCSB Art, Design & Architecture Museum. Ritter joined UCSB after his time as curator and head of contemporary art at the Minneapolis Institute of Art.

“I cannot take responsibility for reopening the museum; the staff — especially under the supervision and leadership of the previous acting director, Silvia Perea — have done an amazing job,” Ritter underscored.

“Irresistible Delights: Recent Gifts to the Art Collection” pulls pieces from the reserves of the museum that comprise over 10,000 works of art donated by patrons, alumni and faculty. In particular, “Irresistible Delights” has a strong focus on contemporary and African art.

“We [wanted] to recognize these major gifts that may not have been seen within the last five to 10 years,” Ritter described.

A goal of the novel exhibitions, “Sound of a Thousand Years: Gagaku Instruments from Japan” and “From Riggs to Neutra and Niemeyer: Tremaine Houses, 1936-1977,” was to highlight the talent and expertise of the faculty.

Professor Fabio Rambelli, International Shinto Foundation chair in Shinto studies and chair of religious studies at UCSB, curated “Sound of a Thousand Years: Gagaku Instruments from Japan” which takes attendees through the history of the classical Gagaku orchestra at the Imperial Court of Japan by displaying not only the ancient instruments but also costumes and videos of depictions of ancient performances.

A standout feature of the exhibit that Ritter highlighted was the installation of the exhibition pieces and their occupation of space in the museum.

“The design team at the museum created a scaffolding that wraps around the walls. It becomes a place to sit and watch the Gagaku performances, but it also becomes a shelf that runs throughout the space that references Japanese architecture. That attention to detail and the way the design is seamlessly integrated into the space and literally supports the objects that are in the exhibition is a really impressive touch of detail,” Ritter communicated.

“All of the houses that are featured in the exhibition were created — and one was never realized — in Montecito by the Tremaine family,” Ritter described.

Welter and the museum design team also skillfully utilized the space to display architecture, a complicated medium to display within a building. The set-up includes a metal curtain that viewers can see the displays through.

Ritter shared that he hopes the faculty curation of exhibitions will continue as it supports a wide range of ideas and visions. Diversity was a throughline of the varied exhibitions, Ritter said, from “ancient Japanese music instruments, which looks at design, to the architecture exhibition, which is contemporary but grounded here [in Santa Barbara], to the incredibly diverse collection [that is displayed].”

Overall, the reopening is “a celebration of the local treasures we have here, both in our faculty and the generous donors of the museum,” Ritter stated.

The Art, Design & Architecture Museum’s reopening signals more than an opportunity to highlight artwork, however.

“With its reopening, [the museum] can be a vital part of the student and faculty community to question what a museum is and what a museum can be going forward,” Ritter said.

“It’s not easy when you have a board and a lot of external stakeholders,” he continued, describing his experience in his past role operating in an art institute.

“First and foremost, our ‘stakeholders’ and audience [for the Art, Design & Architecture Museum] are the students and the faculty … my hope is that this museum speaks to them.”

Ritter wants to bring others from the UCSB and greater Santa Barbara community into the conversation. The director has begun meeting with student groups and faculty and plans to reach out to sister institutions such as the Santa Barbara Museum of Art.

“One-on-one individual outreach and programming of the museum that reflects the artists that live and work in the Central Coast, artists who have been alumni … and people seeing themselves directly reflected in the museum, whether it’s artwork on the wall, bilingual labels or programming happening at the museum, that is core to our mission,” Ritter elaborated.

Ritter also shared his ideas to expand physically on campus as well.

“Temporary installations that are elsewhere on campus, things that are openly accessible to those coming in and out of campus,” Ritter stated as potential on-campus projects.

“This museum can model new approaches and new ways to engage with our students. I have great belief in the students, and I’m excited to see how this museum going forward can work in partnership with them,” Ritter concluded.

Admission to the Art, Design and Architecture Museum is free

Hours of operation are Wednesday through Sunday, 12-5 p.m.

Marisol Cruz is the assistant Artsweek editor for the 2020-2021 school year. She loves discovering new music and buying more books than she can read.

Laundry
We use cookies on our website to give you the most relevant experience by remembering your preferences and repeat visits. By clicking “Accept All”, you consent to the use of ALL the cookies. However, you may visit "Cookie Settings" to provide a controlled consent.
Cookie SettingsAccept All
Manage consent