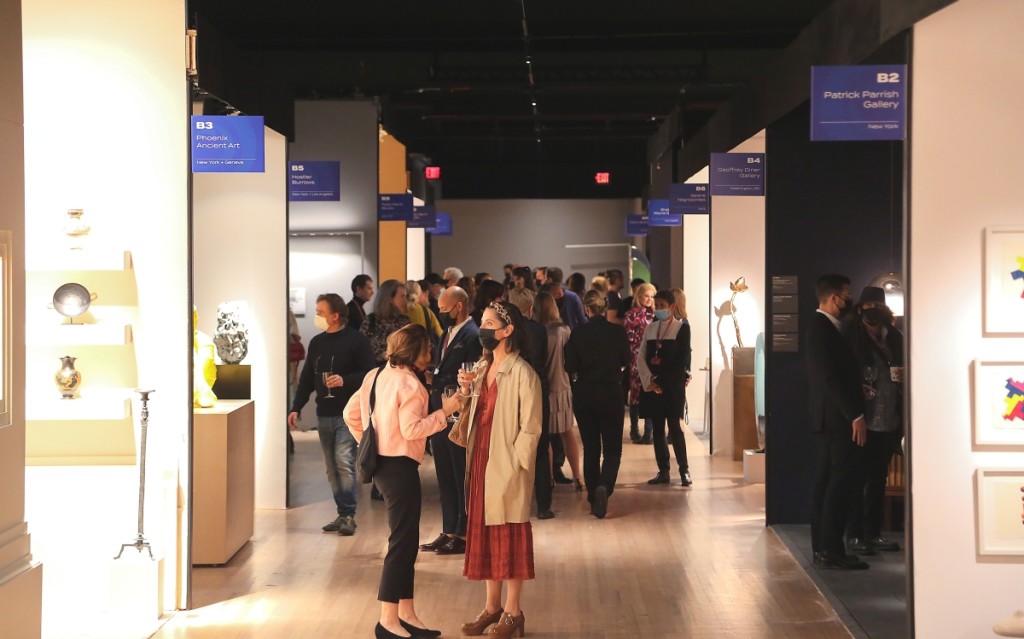 The Park Avenue Armory was back in full swing November 11-15 with the Salon Art + Design.

Review and Photos by Greg Smith

NEW YORK CITY- It was a homecoming of sorts – perhaps more of a reconvening after a long, gritty campaign – when the Salon Art + Design fair returned to the Park Avenue Armory November 11-15 for its tenth anniversary. All were not present, but there was a pronounced sense of relief among those who entered through the armory’s towering, heavy doors; an energy that crept through the air and beamed outward from the sellers, the show’s attendees and the beautiful things.

It’s the second major fair to happen in the armory in two years, following on the heels of The Art Show put on by the Art Dealers Association of America the week prior. These November shows came at the dawn of the post-Covid era when travel restrictions eased and international dealers could begin shipping their crates with confidence that they could meet them on the other side of the ocean.

The show’s executive director, Jill Bokor, said that had the restrictions been eased just three days later, she would have lost an additional 11 dealers – it was that close to being a 35-dealer show. But both she and Sandy Smith, the president and chief executive officer, were steadfast in their commitment to producing this 2021 edition regardless of the booth count and it amounted to 48 dealers and nine partners, down only seven dealers from 2019 and all of them European.

“We had no idea what to expect at all,” Bokor told us. “Our expectations were that the gate might be half of 2019, but everything was better than anyone had anticipated.” Nine thousand people attended the show, down only ten percent from the last edition.

It presented an opportunity for Bokor to go out of the show’s normal range and invite new galleries. More antiquities entered, Tribal art, Japanese craft and a few galleries with new artists on their rosters made debuts, but the high style of Salon Art + Design never wanes as it skips with unapologetic daring through contemporary, vintage and historic periods of production. 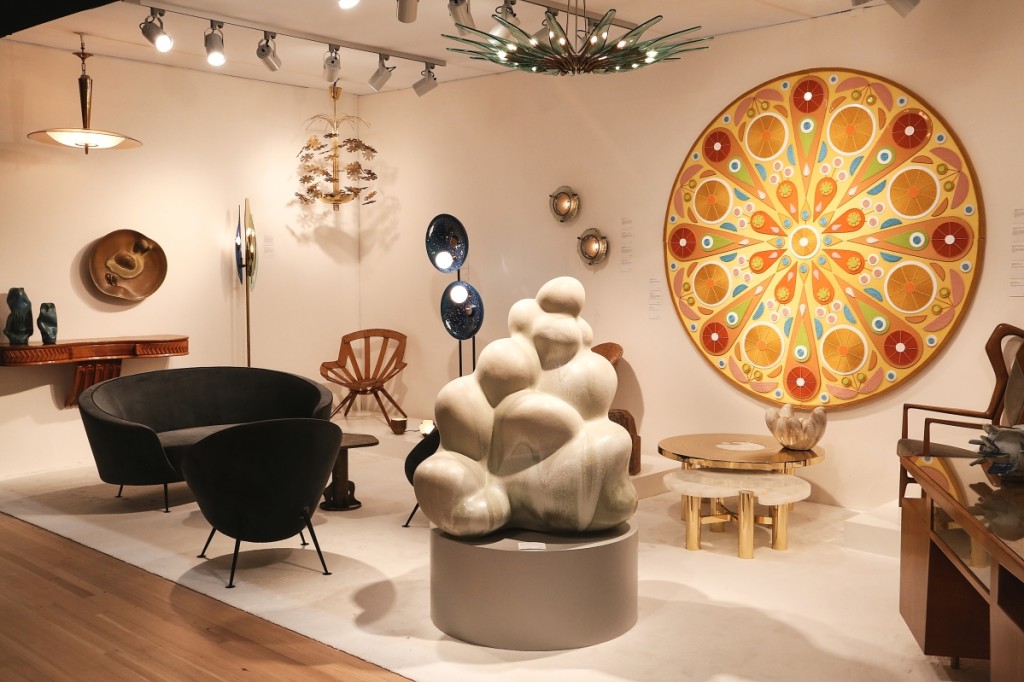 Paul Donzella of Donzella Galleries said the energy at the show was buzzing. His booth featured titans of design, including Gio Ponti, Paavo Tynell, Max Ingrand and Ico & Luisa Parisi. The large work on the back right wall is by contemporary artist Chris Bogia, “Mandala-Sun.”

“It wasn’t only a question of doing well sales-wise,” said Paul Donzella of Donzella Gallery, “It was just so great to be back in the armory and doing a fair. You could feel that all during set-up, everyone was very excited, and once the doors opened it was the same with the audience. The energy was really good and sales were really strong. I think most of my colleagues did well.”

Among his sales, Donzella counted a rare pair of Gio Ponti “Triennale” armchairs, circa 1954. “They’re an incredible design,” he said, “A very paired down version of a wing chair that Ponti had been experimenting with for a number of years in the 50s. This model, you might see one pair come to market every three years. These had original labels, which I’ve almost never seen, and I sold them to a collector in Italy.”

Show newcomer Culture Object, whose gallery is on West 38th Street, fashioned a storeroom of contemporary vessels as he beckoned attendees to step behind the veil into a colorful wonderland. Gallerist Damon Crain said the runaway favorites in his booth were the plastic-coated neon “Anthropophorae” ceramic works of Maxwell Mustardo, a New Jersey artist. Crane sold every work in his booth from Mustardo and more back at his gallery.

American design was on show with Lobel Modern, which sold out the majority of its booth. Owner Evan Lobel said the field in quality American design is thinning, and whereas other galleries may fill the hole with contemporary art and design, he has found it gratifying to dig in and seek out the very best examples from his stable of Twentieth Century American icons, which includes Paul Evans, Tommi Parzinger, Philip and Kelvin Laverne and Karl Springer.

“I’ve searched far and wide to find the best pieces by the designers I specialize in. In a market where those pieces are getting rarer and rarer, it just happened to pay off at the show,” Lobel said. 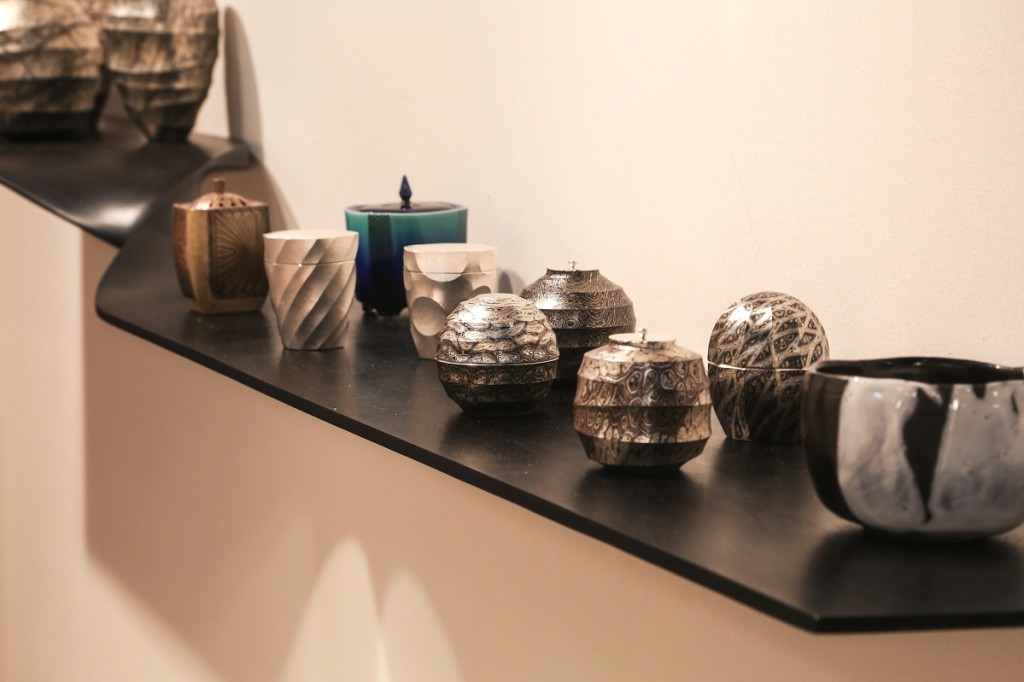 Onishi Gallery displayed the extremely fine work of Japanese metalsmiths, some of them designated Living National Treasures in that country.

Lobel’s sales included a welded sculpture top coffee table by Paul Evans that he said was one of the finest examples of that form by the New Hope artist that he had ever seen. Spanning much of the booth’s back wall was a long credenza by French designer Raphaël that found a new home. The cabinet featured accordion doors in a volcanic Beka lacquer in a bronze finish.

Japanese metalwork was on the floor for the first time from Onishi Gallery, which represents a number of remarkable metalsmiths that have earned the prestigious title of Living National Treasures in that country. A small group of vessels by Sako Ryuhei utilized the Seventeenth Century Mokumegane technique, a process of laminating thin alloy sheets of various metals that, when worked, produces a topographical texture.

Throckmorton Fine Art had one of the more varied booths in the show as it exhibited three major Latin American photographers alongside Pre-Columbian artworks, Chinese jade and antiquities. An onyx Teotihuacan mask with obsidian eyes from the Fourth Century stood before a group of lithographs by Andy Warhol from his “Shoes” series. Behind were silver gelatin prints by Flor Garduño and Graciela Iturbide, who Spencer Throckmorton called the most powerful women in Mexican photography.

American craft from Arthur Espenet Carpenter and Wharton Esherick was found with Chicago gallery Converso. The gallery offered Esherick’s “Seiver Residence Sofa,” one of only three freestanding sofas the craftsman ever produced. Philadelphia patrons Lawrence and Alice Seiver became quick clients for Esherick in the mid-1950s. Alice Seiver once wrote, “I would tell Wharton what I needed. But I never told him what it should look like, and I never asked when I would get it.” Esherick’s unrestricted designs for the Seivers resulted in some of the most pure commissions he ever created.

In the same spirit were works from other American furniture artists in the booth of Philadelphia’s Moderne Gallery. Owner Bob Aibel said he had strong sales among his designs from George Nakashima. A “Drop” side table in carved maple by Miriam Carpenter featured alongside a fine “Ellipse II” rolltop desk by Jere Osgood, the two representing different styles of the contemporary school. After graduating from RISD in 2006, Carpenter cut her teeth designing furniture for Mira Nakashima for seven years. She is currently the subject of “Miriam Carpenter: Shaping the Ethereal” at the James A Michener Art Museum through March 2022, her first solo museum exhibition, where a companion “Drop” table is on exhibit. 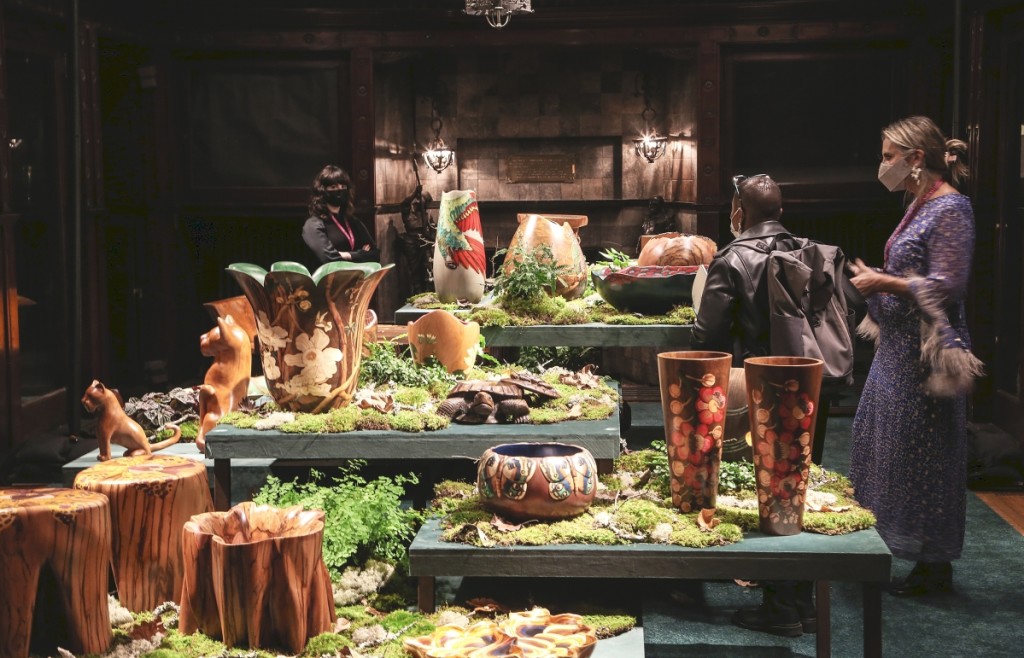 Among the partners at the show was Silvia Furmanovich, who produced a jungle of vessels in one of the armory’s side rooms.

“There was a somewhat smaller audience,” Aibel said, “But it felt like the people who made the effort to come were mostly very serious. We had lots of serious conversations about things and we’re really happy.”

Aibel considers Carpenter to be a rising star. “I really believe she has the potential to be one of the greats,” he said. “She’s amazingly talented, her ability to design is only exceeded by her ability to make very complex pieces. She’s on her way.”

A lineup of Jean Prouvé’s famed “Standard” chairs tracked the French designer’s changes to that work through time at Gallery Dobrinka Salzman. Prouvé created the first “Standard” chair in 1934 and altered it in both construction and materials through the next 20 years. In the 1950s, Prouvé began experimenting with aluminum, creating the sculptural legs that would prove final. At other points, when metal was scarce during World War II, wood was used. Other considerations altered the design, including his want for the chair to ship flatpacked.

Among the bouquet of Tiffany Studios lamps with Macklowe Gallery was a Peony shade table lamp. Tiffany produced the design in a moment of horticultural frenzy when upper-class Americans, including his associate and friend, Harvard professor Joseph Rockman, would travel to remote areas in China and Japan to bring back peony cultivars that had never before left those places. On this shade was the Japanese Candy Stripe peony, which legend says Tiffany used the Aqua Regia process to produce as he dissolved a gold coin to create a shimmering ruby color.

“People thought the look of the fair had changed and in a very good way,” said Bokor. “It was the first time many people had visited New York City in a while. All the dealers said they missed the New York market, so they were ecstatic to be back.”

Bokor will spend the next year determining how she might fit her new dealers alongside her long-standing European galleries who were unable to commit this year but yearn to be back in 2022.

Home Service
We use cookies on our website to give you the most relevant experience by remembering your preferences and repeat visits. By clicking “Accept All”, you consent to the use of ALL the cookies. However, you may visit "Cookie Settings" to provide a controlled consent.
Cookie SettingsAccept All
Manage consent